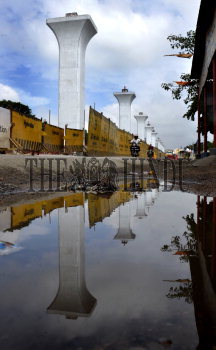 Caption : HYDERABAD, 29/08/2012: A major chicken neck created by Hanuman Temple between Habsiguda and Uppal becomes a major source of traffic jam during peak traffic hours. While half of the carriageway is covered by Hyderabad Metro Rail construction works, the other half are riddled with potholes and severe ROAD erosion. Photo: Nagara Gopal