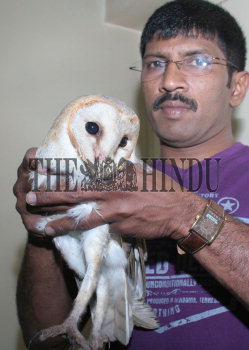 Caption : UDHAGAMANDALAM, 28/08/2012: A barn owl which had strayed into the new project of the HPF at Indunagar near Ooty was rescued and released by wildlife enthusiast Sadiq on August 28, 2012. Photo: M. Sathyamoorthy