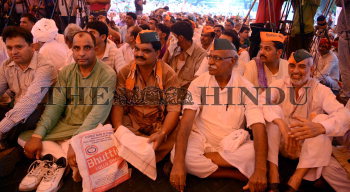 Caption : NEW DELHI, 20/08/2012: Farmers seen during a protest called by BJP against alleged anti-farmers policy of the Union Government at Jantar Mantar in New Delhi on August 20, 2012. Photo: S. Subramanium