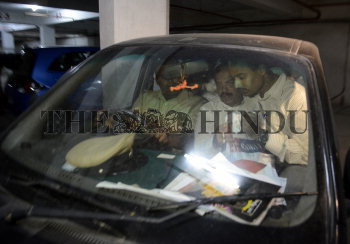 Caption : BANGALORE, 09/08/2012: Mumbai police taking away Sunitha Sharma, the woman who is wanted in Mumbai for her alleged role in several high-profile FRAUD cases, at Golden Orchid apartments off Lavelle Road in Bangalore on August 09, 2012. It took three hours for the police to persuade her to come out as he locked herself inside one of the flats. Photo: V. Sreenivasa Murthy