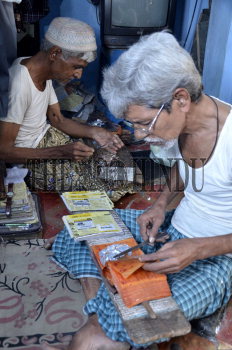 Caption : HYDERABAD, 06/08/2012: Workers preparing waraq (silver foil) used in different delicacies, especially sweets and paan, in the old city of Hyderabad. The demand for 'waraq' increases during the holy month of Ramzan as many use it in sweets and other delicacies. Photo: Nagara Gopal