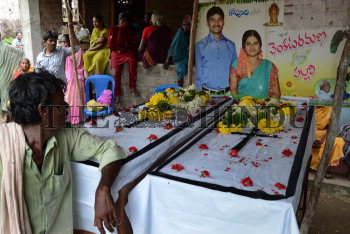 Caption : VIJAYAWADA, 31/07/2012: Relatives paying respect to the bodies of Venkata Ramana and Pallavi at Anigandlapadu village in Krishna district on July 31, 2012. The couple were charred to death while the S-11 coach of the ill-fated Tamil Nadu Express in which they were travelling, caught fire in Nellore on July 30. Photo: V. Raju