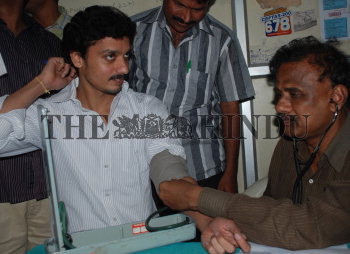 Caption : HYDERABAD, 31/07/2012: BJP MLA of Kampli T.H. Suresh Babu, who was arrest by the Anti-Corruption Bureau (ACB) in the cash for bail scam of former Karnatka Minister Gali Janardhan Reddy, being examined by the doctor at Osmania General Hospital in Hyderabad on July 31, 2012. Photo: Nagara Gopal