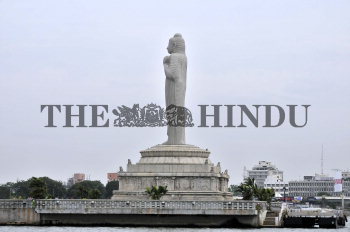 Caption : HYDERABAD, 26/07/2012: The BUDDHA STATUE is the world?s largest single-stone STATUE of BUDDHA, which is made of a white granite rock. It is 22 metres (72 feet) in height and 450 tonnes (4,50,000 kilograms) in weight. It is located in the center of the lake on the rock of Gibraltar in the tranquil waters of the Hussain Sagar Lake. It was a contribution of the BUDDHA Poornima Project held in the year 1985. The STATUE was carved by 200 artisans for more than two years. The STATUE has been shipped to Hyderabad in November 1988, after some initial troubles, the BUDDHA STATUE was raised up on 12 April 1992. The atmosphere ponders peace and perseverance. A visit to the BUDDHA STATUE by boat would be an unforgettable experience. Photo: K. Ramesh Babu