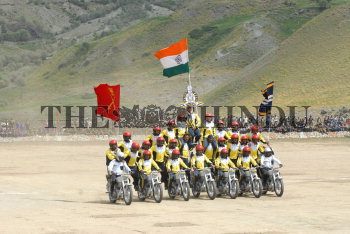 Caption : SRINAGAR, 25/07/2012: A motorcyclist from army's TORNADOES team performing a daredevil stunt at Kargil War Memorial at the two-day Vijay Diwas celebrations, in Drass, on July 25, 2012. Indian army commemorates 'Vijay Diwas' annually in memory of more than 500 soldiers who were killed thirteen years ago during a war with Pakistan. Photo: Nissar Ahmad