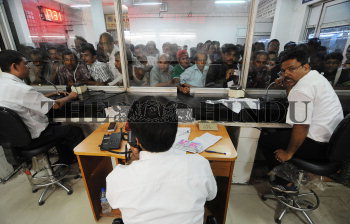 Caption : GUWAHATI, 24/07/2012: Passengers enquire about train schedules at the Guwahati station on July 24, 2012 after several trains were cancelled, following violence in lower Assam. As many as 37 trains, including three Rajdhani Expresses, have been held up within the 54 km stretch between Srirampur and Salakati railway stations under the North East Frontier Railway and about 25,000 passengers are stranded. Photo: Ritu Raj Konwar