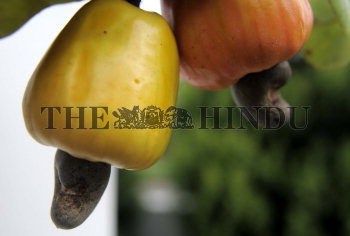 Caption : KOCHI,19/07/2012.The last of the cashew apples with kernals for the season are seen in a homestead farm near Kochi as the cashew season comes to an end in the state with the onset of the monsoon. Figures released by Cashew Export Promotion Council said that earnings from cashew kernel export jumped from Rs. 2,819 crore during 2010-11 to Rs. 4,390 crore during the last financial year despite a global economic recession marked by sluggish market growth. Photo: K_K_Mustafah.