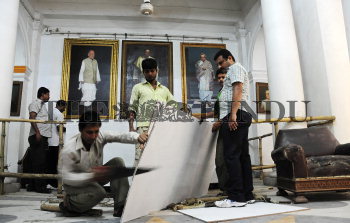 Caption : Kolkata: The laborers are seen busy making the arrangements for the Presidential Election at West Bengal Legislative Assembly on Wednesday. The long drama over choosing and supporting the presidential candidate and standing of Trinamool Congress has come to an end with the decision of supporting Pranab Mukherjee, the UPA canditate announced by as the party supremo, Mamata Banerjee just forty eight hours before election. Photo: Arunangsu Roy Chowdhury July 18, 2012.