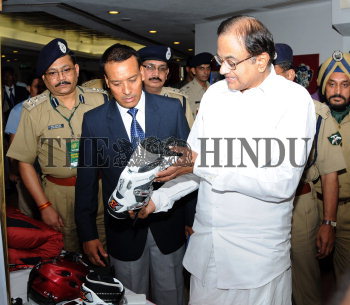 CHIDAMBARAM AT FLAG IN CEREMONY OF ITBP RIVER RAFT

Caption : NEW DELHI, 11/07/2012: Union Home Minister P. Chidambaram with ITBP DIG and expedition leader Prem Singh (second from left) admiring the world-class special equipments and clothes, in New Delhi on July 11, 2012. An ITBP team successfully completed a two-month long rafting expedition on the river Ganga, traversing 2,500 km on water from Gangotri to Ganga Sagar. An ITBP climbers team made history by skiing down from the world's highest summit-Mount Everest-from the Chinese side, the maiden Indian squad to achieve the feat. Photo: Shanker Chakravarty