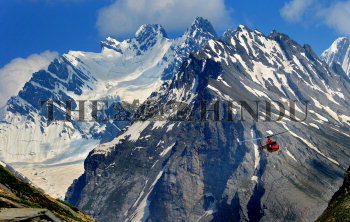 Caption : SRINAGAR, 10/07/2012: In Khalsi area, 135 km from Srinagar, a chopper carrying Amarnath pilgrims is seen against the backdrop of GLACIERS in the silver snow-clad mountains in the Himalayan ranges melting thanks to global warming. The picture has been captured on the way to Amarnath in South Kashmir. The annual Amarnath yatra commenced from the twin routes of Baltal and Pahalgam on June 25 and so far 3.15 lakh pilgrims had paid obeisance at the shrine housing the naturally-formed ice-lingam in South Kashmir. The pilgrimage has claimed 51 lives so far. Photo: K.R. Deepak