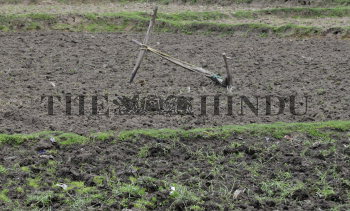 Caption : HYDERABAD (AP) -05-07-2012 - BL/ STAND ALONE PIC / STATES PAGES : - FARMING OPERATIONS LIE SHATTERED: That is the fate of farm operations in several parts of Andhra Pradesh as farmers have nearly given up hope of a normal monsoon , with a week to go . In the State's 1194 mandals only 54 mandals in West Godavari District have received some rainfall between 5.75 cms to 0.5 cm , followed by Krishna District and Warangal District . Visakhapatnam's - Sabbavaram mandal received 12.75 cm rain this season . With the monsoon playing truant , the spectre of drought looms large . The scene at a farm land near Chevella in Ranga Reddy District near Hyderabad on Thursday . PHOTO: P_V_SIVAKUMAR