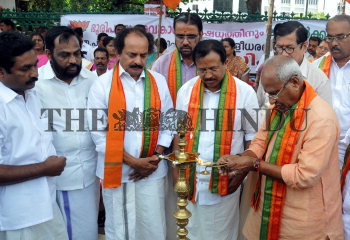 Caption : THIRUVANANTHAPURAM, 04/07/2012: LAMP OF PROTEST: BJP Leader O. Rajagopal lighitng a lamp as he inaugurates a day-long fast by party workers against the 'League-isation' of the Government. The lighting of the lamp was also in protest against the refusal by some Muslim League ministers to light the ceremonial lamp during inaugural functions. Photo: C. Ratheesh Kumar .