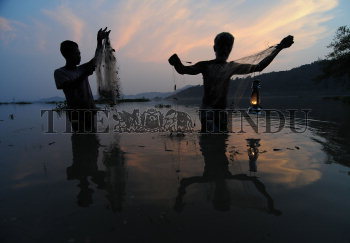 Caption : MORIGAON, 29/06/2012: Flood affected villagers catching fish in flood waters in Mayong village in Morigaon district of Assam on June 29, 2012. Floods have taken the toll of 23 human lives in Assam State so far. Besides, a total population of around 11 lakh in 2084 villages in 22 districts has been affected by the floods this year. In all, more than 44000 hectares of crop area have been affected and the authorities have set up 173 relief camps to shelter the flood-hit people all over the State. A total population of about two lakh has been sheltered in the relief camps according to the official reports. Photo: Ritu Raj Konwar