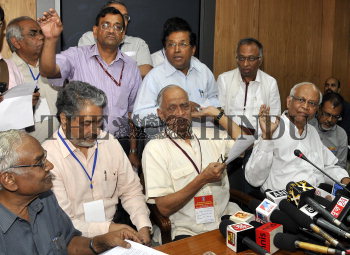 Caption : NEW DELHI, 27/06/2012: R.A. Mashelkar (right), Chairman, Board of Directors of IIT-Gandhinagar, alongwith M.M. Sharma, Chairman, Board of Governos of IIT-Madras, Director of IIT-Delhi R.K. Shevgaonkar, Director of IIT-Kharagpur Damodar Acharya (behind, centre), along with other representatives from IITs addressing the media after the 45th meeting of the Council of IITs in New Delhi on June 27, 2012. Photo: Rajeev Bhatt