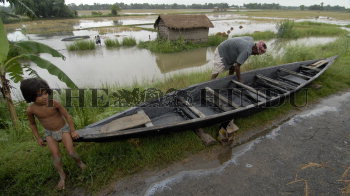 Caption : MORIGAON, 26/06/2012: A man polishes his country boat with oil as flood water started entering in to his village in Morigaon district of Assam on June 26, 2012. Torrential rains in Assam have led to worsening of the flood situation with villages and farmland in many districts under water and reports of two more deaths taking the toll to 10. Ferry services between the northern and southern banks of the Brahmaputra have been suspended till further orders due to rising water levels and swift current. Assam's flood situation deteriorated today as incessant rains breached embankments inundating several villages, vast tracts of cropland and affecting nearly two lakh people according to the official sources. According to the media reports the Brahmaputra river and its tributaries are in spate and flowing above the danger mark at several places in the 15 affected districts of the state. Photo: Ritu Raj Konwar