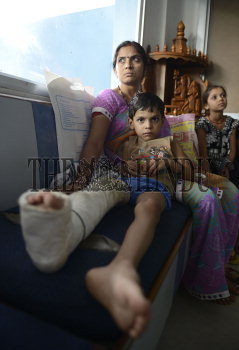 Caption : BHOPAL, 25/06/2012: A child patient wait with his mother to cut the plaster at a private hospital in Bhopal on June 25, 2012, as doctors went on a 'token protest' in response to the strike call given by the Indian Medical Association, to register their discontent with the Central government's proposed National Council for Human Resources in Health (NCHRH) Bill - 2011, the Clinical Establishments' Act - 2010 and the introduction of Bachelor of Rural Health Care course. Photo: A.M. Faruqui