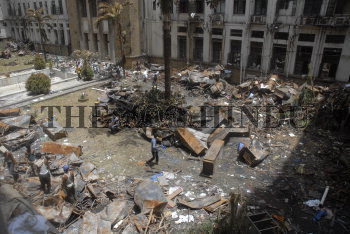 Caption : MUMBAI, 25/06/2012: Charred articles seen at the premises of MANTRALAYA, the Maharashtra State Secretariat, on June 25, 2012 after a part of it was re-opened for transacting business. A major fire spread widely and ravaged the insides of the building killing five and injuring several others on June 21. Photo: Vivek Bendre