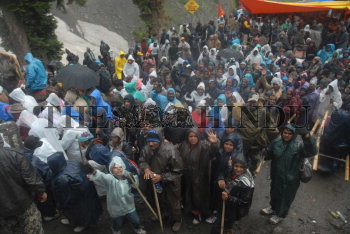 Caption : SRINAGAR, 25/06/2012: Pilgrims on the way to Amarnath shrine cave on June 25, 2012. The annual Amarnath Yatra began on June 25 with pilgrims from the Baltal and Nunwan base camps starting their journey to the cave shrine. Earlier, bad weather delayed the scheduled start of the pilgrimage from the camps. The annual yatra began from both the routes - 16 km from Baltal in Ganderbal and the traditional 45 km Pahalgam track in Anantnag district with a Central Reserve Police Force escort. Photo: Nissar Ahmad