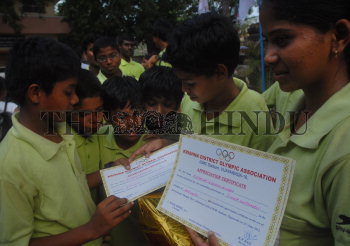 Caption : VIJAYAWADA (AP), 23-06-2012. Archers sharing a lighter moment at a function organised by Krishna District Olympic Association as part of the International Olympic Day at IGMC stadium in Vijayawada on June 23, 2012. PHOTO: RAJU_V