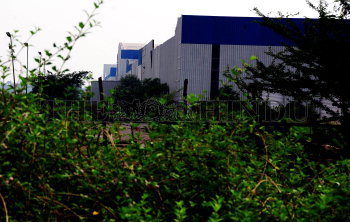 Caption : Kolkata: Weeds have covered the controversial small car project of Tata Motors in Singur of Hooghly district of West Bengal on Friday. Incidentally, Calcutta High Court has ruled that the legislation introduced by the Trinamool Congress Government, which allows the government to recover land leased in Singur to Tata Motors is constitutionally invalid. She reveals that the area have lost the crop this year due to lack of irrigative water. Photo: Arunangsu Roy Chowdhury June 22, 2012.