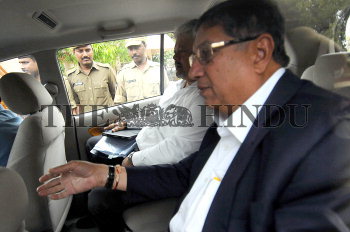 Caption : HYDERABAD. 18/06/2012:Board of Control for Cricket in India President and India Cements LTD, Managing Director Narayanaswami SRINIVASAN who appeared before the Central Bureau of Investigation at Dilkusha Guest House for questioning in connection with the disproportionate assets case against YSR Congress chief Jagan Mohan Reddy, in Hyderabad on June 18, 2012. SRINIVASAN had been summoned by the CBI on June 8 because he is the Managing Director of India Cements Ltd, which invested in Bharathi Cements and Jagathi Publications, companies promoted by Jagan Reddy.-.Photo:Mohammed_Yousuf