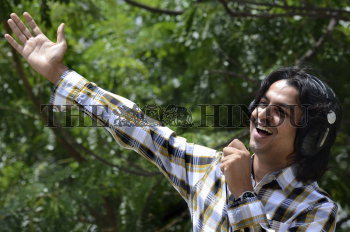 Caption : HYDERABAD, 11/06/2012: National award-winning RJ Shekhar during an interview with 'The Hindu Metroplus' in Hyderabad on June 11, 2012. The radio jockey hosts BIG Sandadi, a daily breakfast show that airs at 7 a.m. daily with the works about town. This sought-after RJ from Hyderabad just got the official vote when he won two national awards at the India Radio Forum 2008 in Mumbai. Photo: Nagara Gopal