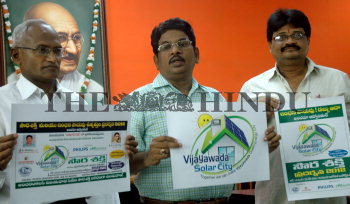 Caption : VIJAYAWADA, 08/06/2012: A new Logo of the Vijayawada Solar City being unveiled by Municipal Commissioner G. Ravi Babu in the presence of Krishna District Manager NEDCAP Satyanarayana (extreme right) in Vijayawada on June 08, 2012. Solar Power Expo will be hosted by the VMC from June 15 to 17. Photo: V. Raju