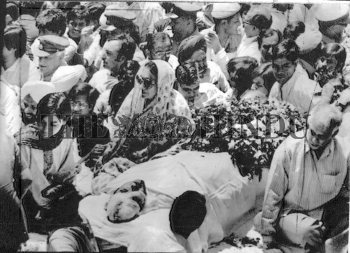 Caption : Sanjay Gandhi, second son of Indira Gandhi, Prime Minister was killed in a helicopter crash in New Delhi on June 23, 1980. Picture shows his body being taken to the PM's house. Indira Gandhi and Mrs. Maneka Gandhi are in the picture.