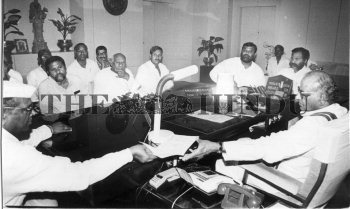 Caption : The Andhra Pradesh Chief Minister, Vijayabhaskara Reddy holding talks with the Excise Minister, Bapi Raju to give ex-gratia grant to the next of kin of the victims who died of liquor poisoning at Chandi Bazar during September 1992. 1992-10-13.