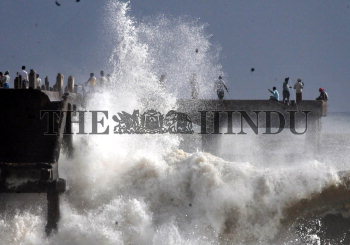 Caption : THIRUVANANTHAPURAM, 06/06/2012: Arabian Sea goes into a rage, typically so during the monsoon, sending waves after waves crashing into the Valiathura pier in Thiruvananthapuram. Locals watch as a wave runs up the structure jutting into the sea on June 06, 2012. Photo: C. Ratheesh Kumar