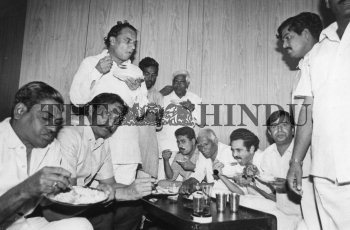 Caption : The Telugu Desam MLAs in Andhra Pradesh staged a dharna on September 5, 1992 in the Assembly protesting against the anti-farmer policies of the State Government. They called off the dharna following the Speaker's assurance on allowing a discussion on the subject. The TDP MLAs having a lunch after ending the dharna. 1992-09-05.