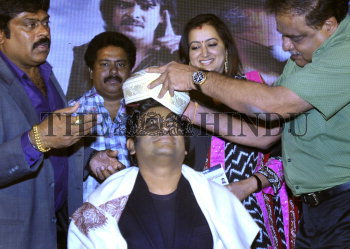 Caption : BANGALORE, 04/06/2012: Music director A.R. Rehman being felicitated by actors Ambareesh, Sumalatha, producer K. Manju (left) and director Sriram for composing music for 'Godfather', his first film in kannada, during the release of the audio CD of the film in Bangalore on June 04, 2012. Photo: K. Bhagya Prakash