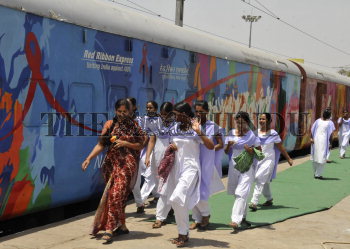 Caption : HYDERABAD (AP) -04-06-2012 - BL/ STATES PAGES / STAND ALONE PIC : ON A HARD TASK : Apprentice nurses on way to visit the 'Red Ribbon Express' at Secunderabad Station in Hyderabad on Monday , that is here to create a HIV/AIDS awareness . Being promoted by the Ministry of Health and Family Welfare the Red Ribbon Express is assisting the daunting task of the National AIDS Control Programme (NACP) III 2007-2012 of halting and reversing the epidemic in India. India has a low HIV prevalence of 0.34 per cent, but in terms of individuals infected, the country is home to the third largest number of people living with HIV in the world. A vast majority of HIV infections occur through sexual transmission (85.6 per cent) and nearly five per cent of infections are attributable to parent-to-child transmission. The epidemic is disproportionately affecting women, who account for 40 per cent of the total infections in the country. PHOTO: P_V_SIVAKUMAR