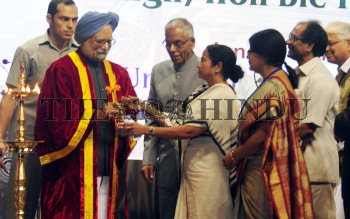 Caption : Kolkata: The Chief Minister of West Bengal, Ms. Mamata Banerjee hand overs the flower to the Prime Minister, Dr. Manmohan Singh to pay homage to the portrait of Justice Sir Ashutosh Mukherjee, the first President of Indian Science Congress during the Inception ceremony of General President of Indian Science Congress Association at the centenary auditorium of University of Calcutta on Saturday. Incidentally, no garland was found at the time of paying respect to the first president and Chief Minister picked up the flower from dais and gave it to Mr. Singh. The Prime Minister inaugurated the centenary celebration as the General President of Centenary Science Congress today. Photo: Arunangsu Roy Chowdhury May 31, 2012.