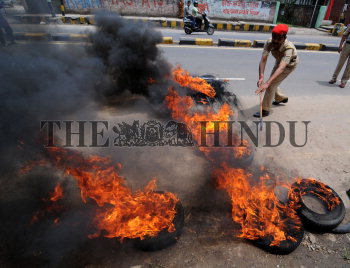 Caption : GUWAHATI, 31/05/2012: A police personnel tries to douse the fire on a road during nationwide strike against the fuel price hike in Guwahati on May 31, 2012. The Bharatiya Janata Party (BJP) has given call for countrywide protests against a steep hike in the price of petrol while a key ally has demanded a reduction. Indian government has increased the prices of petrol by INR 7.50 or about EUR 0.10 per liter, effective from the midnight of 23 May. Photo: Ritu Raj Konwar