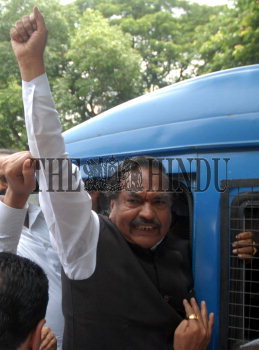 Caption : BANGALORE, 31/05/2012: State President of Bharatiya Janatha Party arrested by police after the protest on SBM Circle against UPA Government for Fuel Hike during the Bharat Bandh on May 31, 2012. Photo: V. Sreenivasa Murthy