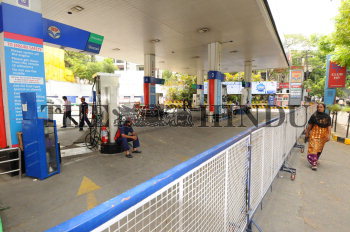 Caption : HYDERABAD:31/05/2012: Gas station (PETROL pump) along with shops in commercial market rolled down their shutters during NDA sponsor 12-hour nationwide shutdown was supported by all left and other political parties to demand rollback of PETROL price hike in Hyderabad on Thursday. The protest in Andhra Pradesh is significant as the PETROL price in the state is one of the highest in the country. The state levies 33 per cent Value Added Tax (VAT) on PETROLeum products, the highest in the country. Photo: Mohammed_Yousuf