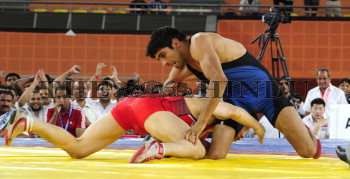 Caption : New Delhi, 26/05/2012-- Rajneesh Dalal of India in action against Kim Jin Cheol of Korea during the Mens 60 Kg final of the Hari Ram Indian Wrestling Grand Prix at IGI Stadium in New Delhi on May 26, 2012. Photo: S_Subramanium