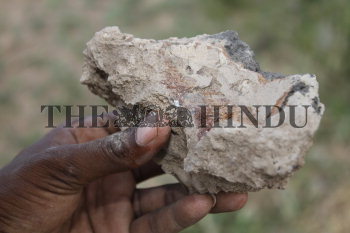 Caption : ERODE, 25/05/2012: Picture shows a broken part of a crucible kept in a gemstone making industry at a habitation site unearthed at Kodumanal in Erode district. The shells were used for making bangles. This discovery was made during excavations at the village by the Department of History of Pondicherry University in May 2012. Beads from semi-precious stones such as quartz, carnelian, lapiz-lazuli, beryl, agate and so on were manufactured in this industrial complex. Photo: K. Ananthan