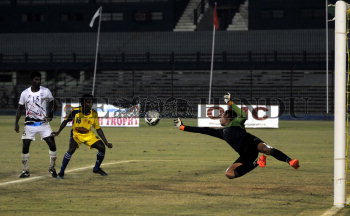 Caption : Cuttack, Odisha, 25/05/2012. Services custodian M. Nanao Singh foils Kerala's K. Rakesh's attempt at the goal in the semifinal of the 66th National football championship for the Santosh Trophy at Barabati Stadium in Cuttack on May 25, 2012. Photo: Ashoke Chakrabarty