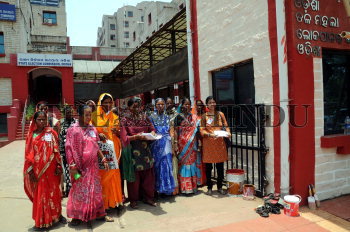 Caption : BHUBANESWAR, 25/05/2012: Activists of the All India Revolutionary Women's Organisation and a few relatives of Mini Pradhan, who is in a critical condition in a hospital in Cuttack, at the Odisha Women's Commission office in Bhubaneswar on May 25, 2012. Mini Pradhan, who was working as a domestic helper of a former district judge's family, was pushed off the Mahanadi barrage allegedly due to an illicit affair, in Cuttack on May 8. Photo: Ashoke Chakrabarty