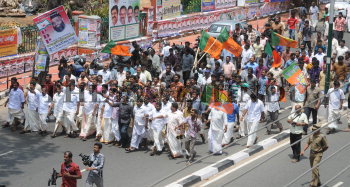 Caption : THIRUVANANTHAPURAM, 22/05/2012: Activists of the Bharatiya Janata Party(BJP) marching to the Accountant General's office in Thiruvananthapuram on May 24, 2012 in protest against the hike in petrol prices announced by the Central Government on Wednesday. Photo: S. Gopakumar