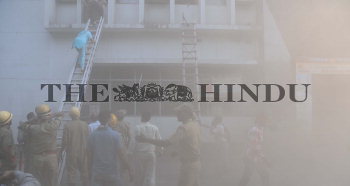 Caption : NEW DELHI, 23/05/2012: A scene at Punjab National Bank following a fire accident, in New Delhi on May 23, 2012. A major fire broke out at the bank headquarters on Parliament Street, trapping hundreds of people in the smoke-filled building and triggering panic across the Capital. Photo: V. Sudershan