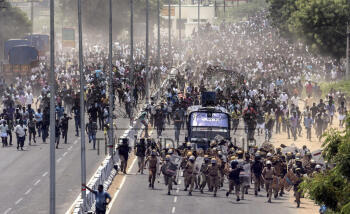 Caption : THOOTHUKUDI, TAMIL NADU, 22/05/2018: Anti- Sterlite protesters marching towards Thoothukudi District Collectorate where they had planned to lay siege on the Collectorate demanding closure of copper manufacturing unit at Thoothukudi in Tamil Nadu on May 22, 2018 turned violent when they clashed with the police. Police fired teargas shells on the protesters at Thoothukudi Palayamkottai bypass road in Thoothukudi. Nine people were reportedly killed in the violence. Photo: N. Rajesh