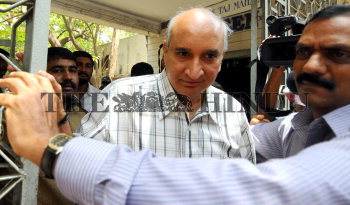 NIMMAGADDA PRASAD BEHIND BARS IN CASE AGAINST JAGA

Caption : HYDERABAD.16/05/2012:-Central Bureau of Investigation Court remanded High flying Andhra Pradesh Industrialist, Matrix LABORATORIES founder Nimmagadda Prasad till May 30 in Hyderabad on Wednesday. He is first industrialist in Andhra Pradesh to arrested for alleged benefits received during the rule of late chief minister YS Rajasekhara Reddy in return for the massive investments he made in his son's Y. S. Jaganmohan Reddy businesses. Photo: Mohammed_Yousuf