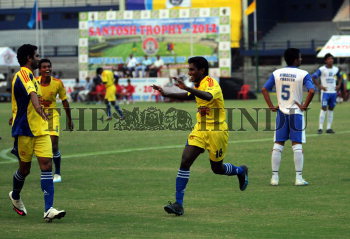 Caption : Cuttack, Odisha, 15/05/2012: Kerala's Vineed Antony is in jubilant mood after scoring his second goal against Himachal Pradesh in the pre-quarterfinal round football match of the 66th National Football Championship for Santosh Trophy in Cuttack on May 15, 2012. Photo: Ashoke Chakrabarty