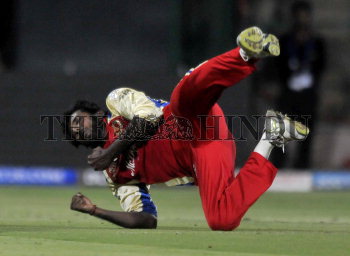 Caption : Bangalore: 06/05/2012: Prashanth Parameshwaran of Royal Challengers Bangalore takes a catch off his own bowling to dismiss Cameron White of Deccan Chargers during the DLF Indian Premier League (fifth edition) Twenty20 cricket match at the M. Chinnaswamy Stadium in Bangalore on May 06, 2012. Photo: G.P. Sampath Kumar