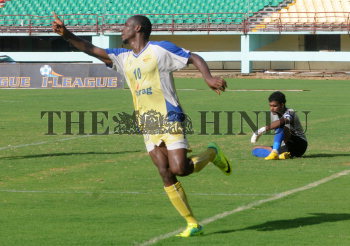 Caption : Kochi, 06/05/12. Chirag United Kerala's David Sunday celebrates after scoring his second goal against Mumbai FC in the I-League football match while the Mumbai FC goalkeeper A.C. Nidhinlal looks disappointed in Kochi on May 06, 2012. Chirag, which has been relegated from the I-League, won the match 5-2. Photo: H. Vibhu