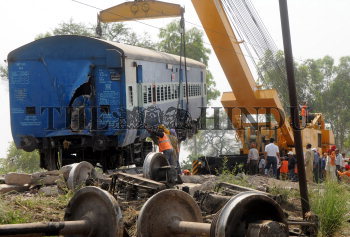 Caption : ROHTAK (HARYANA), 06/05/2012: A damaged bogie of the Punjab Mail being removed after the train derailed near Rohtak on May 06, 2012. Twenty-nine people, including 12 women, were injured when eight coaches of the Mumbai-bound Ferozpur-Mumbai Punjab Mail derailed. Three of the inuuerd were said to be in a critical condition. Preliminary investigations revealed that the derailment was caused by a rail fracture. The derailed coaches included six bogies of the second-class sleeper (S-5 to S-10), one luggage compartment and the guard coach. Photo: R.V. Moorthy