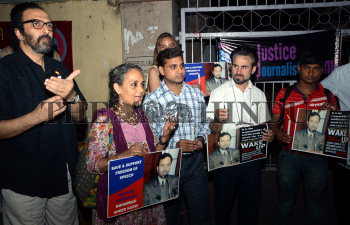 PROTEST AGAINST THE ARREST OF JOURNALIST SYED MOHA

Caption : NEW DELHI, 27/04/2012: Booker Prize winner and activist Arundhati Roy (left) addressing during candle light protest by journalists and social activists, against the arrest of journalist Syed Mohammad Ahmad Kazmi for his alleged role in the February 13 bombing of an Israeli diplomat car, and demanded his immediate release in New Delhi on April 27, 2012. Photo: Shanker Chakravarty